US Economy Not at Full Employment

Markets, which tend to focus on US non-farm payrolls and the unemployment rate, may be relying on an incomplete and arguably inaccurate picture of the US labour market which fails to fully take into account a still sizeable pool of available workers.

Job creation has been robust in recent years, but the working age population has also increased while the share of full-time employees remains modest. As a result, the ratio of the working-age population employed in full-time jobs, currently 48.7%, remains well below its historical average.

Importantly this ratio tends to lead the growth rate in private sector employees’ hourly earnings and points to earnings growth only rising modestly in coming months from around 2.4% year-on-year.

The policy implication, all other things being equal, is that the Federal Reserve may not have to worry near-term about a tight labour market boosting pay-packets and in turn wage-led inflation. With US GDP growth having collapsed in Q1, global growth having slowed further to around 2.6% year-on-year and global PMI and Chinese trade data showing little bounce in April, the Fed’s decision to keep rates on hold so far this year is at least defendable.

My core scenario of one or two Fed rate hikes this year remains feasible but my expectation that the Fed would pull the trigger in June will likely be proven wrong. The Fed fund futures market has all but discounted a mid-year hike, currently pricing in a probability of only 8% for a 25bp hike, versus 23% back on 26 April.

Markets tend to focus on the US Bureau of Labour Statistics’ monthly release of non-farm payrolls (NOFP), the unemployment rate (the number of unemployed divided by the labour force) and the participation rate (the labour force divided by the working age population). But this approach has a number of drawbacks. First, making sense in aggregate of three variables – which stem from two different surveys – is not always straightforward (see Figure 1).

Second, the above variables do not take into account whether the employed are in full-time or part-time jobs. Even if the unemployment rate is low and participation rate high – i.e. a high proportion of the working-age population is employed, the economy may still be far from full-employment if a high proportion of those employed are in part-time (and often-low paid) work. If demand for labour increases, employees can shift from part-time to full-time contracts without putting too much upward pressure on wages. Markets rightly focus on, and react to, the breakdown of full-time versus part-time workers in the Australian labour market, for example.

Therefore, it makes more sense to track the share of the working-age population employed in full-time jobs, which is easy to calculate from data released at the same time as NOFP. If the ratio increases, the pool of available workers is shrinking and employers may have to increase wages not just to retain employees but to attract new employees from the working-age population. 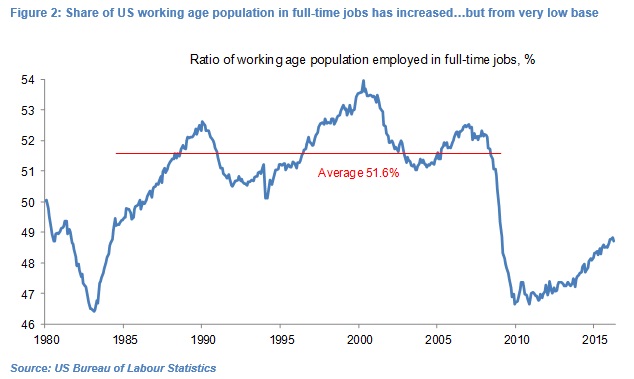 As figure 2 shows this ratio has steadily risen since early 2011 to around 48.7% in April 2016 and supports the Fed’s statement on 28 April that “information received since […] March indicates that labor market conditions have improved further.” The increase in the ratio has resulted from an increase in both: 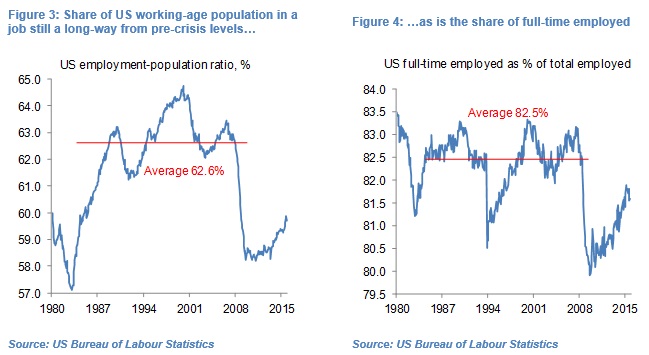 But this index remains a long way from the peaks recorded in early 1990, 2000 and 2007 and is still well below the average of 51.6 recorded between September 1984 and August 2008. The employment-population ratio remains well below its long-term average of 62.6% and a full five percentage points below the highs in early 2000 (see Figure 3). At the same time the ratio of full-time employees is still below its 82.5% average (see Figure 4). Note that the current unemployment rate of 5.0% is below the September 1984-August 2008 average of 5.6% and it would be easy to infer (wrongly in my view) that the US labour market is currently tight and the economy near full-employment.

Importantly, the ratio of the working-age population in full-time jobs seems to lead the growth in private sector hourly earnings by about six months (see Figure 5). The slow but steady rise in the ratio, which indicates that the pool of available labour is shrinking, suggests that the growth rate in hourly earnings will rise very modestly in coming months from around 2.4% yoy in February-April. While this supports the Fed’s reasonably constructive assessment of households’ real incomes, it may not provide the platform for higher US policy rates near-term. 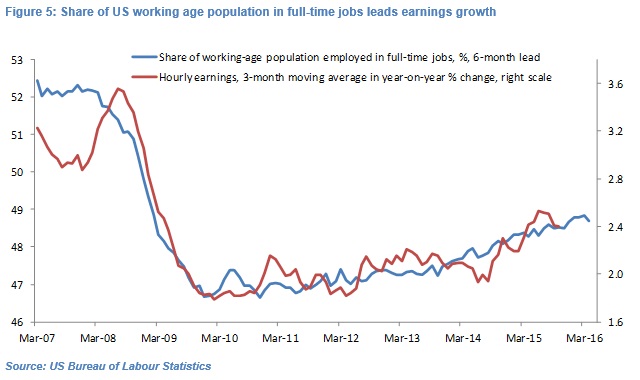 Based on available country-data, global GDP growth slowed by about 0.2 percentage points in Q1 2016 to around 2.6% year-on-year (see Figure 6). While year-on-year GDP growth in the US, European Union, China and Singapore was broadly unchanged or only marginally lower in Q1, it slowed more sharply in other Asian economies. Only in Mexico did GDP growth pick up in Q1.

The pace of slowdown seems to have been broadly similar for both OECD and non-OECD countries. OECD countries which have so far released Q1 data account for about 80% of the OECD’s total GDP and their growth slowed to around 1.92% yoy in Q1 2016 from 2.15% yoy in Q4 2015. 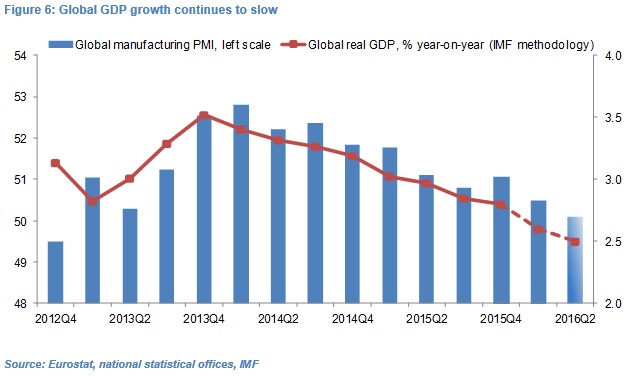 This would be broadly consistent with the decline in the global manufacturing PMI in Q1 to 50.5 from 51.0 in Q4 2015 and be the eight consecutive quarterly decline in global growth since the two-year high of 3.5% year-on-year in Q4 2013. Moreover, the weak global manufacturing PMI print of 50.1 in April suggests that global growth slowed further in early Q2, even if it still remains well above the -1.3% yoy recorded in H1 2009.

tagged with Markets, US Labour