Sterling: The lady’s not for turning (yet!)

There are multiple factors behind Sterling’s collapse in the past fortnight to decade lows and the question remains whether these factors will reverse any time soon.

At the top of the pyramid of causes for Sterling’s demise, in my view, is not the UK’s large current account deficit or Bank of England (BoE) policy but the stance on EU membership which Prime Minister Theresa May has adopted.

So while Sterling’s greater competitiveness may eventually drive FX inflows into the UK and help Sterling to recover, financial markets and investors are likely to continue to take their cue from the British government near-term.

Simply put, if Theresa May continues down of the path of “Hard Brexit”, however ill-defined, Sterling is likely to remain under pressure.

However, history shows that while EU leaders have a tendency to drag their feet over key issues, they are able and willing to eventually find some kind of compromise.

Moreover, Theresa May will be subject to the will of her own Conservative Party – which on the whole supports membership of the UK or at least a softer form of exit from the EU – and of the people.

While the BoE would prefer a more stable currency and lower yields, there is probably little than it can (or should) do near-term beyond trying to reassure markets, investors and households. 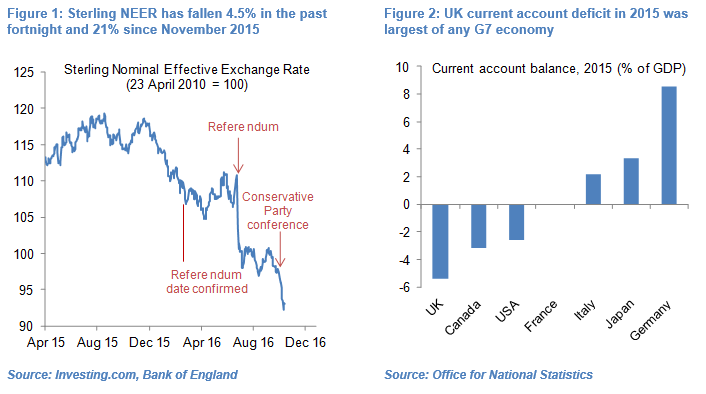 Some of the blame for Sterling’s collapse (see Figure 1) has rightly been apportioned to the UK’s sizeable current account deficit of 5.8% of GDP in H1 2016 and 5.4% of GDP in 2015 – the largest of any G7 other economy (see Figure 2). There is little doubt that this deficit has for years left the UK very reliant on foreign capital inflows – including Foreign Direct Investment (FDI) and equity and bond inflows – and left Sterling vulnerable.

Somewhat perversely, these capital inflows have themselves significantly contributed to this widening of the current account deficit. Indeed, the rise in foreign ownership of UK companies, equities and gilts alongside stable rates of returns on these investments has resulted in large dividend and coupon payments. These outflows have significantly outweighed corresponding earnings derived from the UK’s stock of assets held abroad – to the tune of £35.7bn or 2% of GDP in 2015 (see Figure 3) and led to a marked deterioration in the primary balance of the UK balance of payments. These net outflows account for about 80% of the widening in the current account deficit since 2011 (see Figure 4). In comparison, the modest increase in the trade deficit accounts for only 20% of the deterioration in the current account deficit.

So the solution to the UK running a trade deficit – foreign FX inflows – has become part of the problem (akin to someone living above his/her means, getting into debt and the interest on this debt exceeding his/her revenues and adding to his debt burden). This will be particularly relevant when I examine below whether and how Sterling could stabilise and ultimately appreciate. 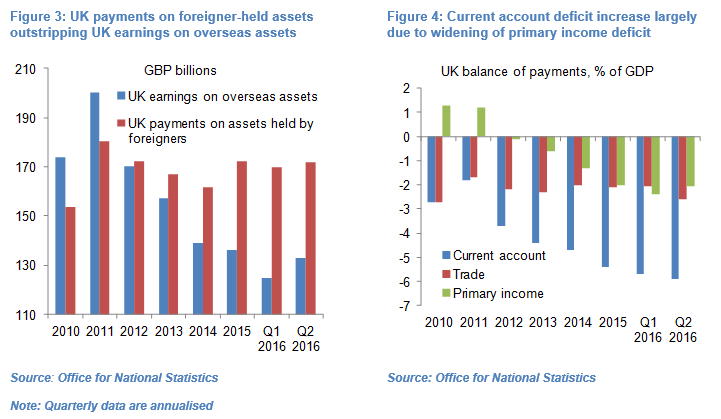 Current account deficit may not narrow much near-term, so it’s all about capital inflows

The conclusion which I draw is that while the UK’s large current account deficit may be the root cause of Sterling’s demise, the deterioration in the financial account was the trigger. The corollary is that if Sterling is going to stabilise and even appreciate, it will likely be from stronger equity, bond and FX inflows into the UK rather than any material narrowing of the current account deficit.

I would go a step further and argue that the UK current account deficit may not narrow much near-term. Despite the 22% depreciation in the Sterling NEER since November 2015, the trade deficit has widened, not narrowed (see Figure 6). While the benefits of a more competitive currency may eventually materialise, growth in the Sterling-value of exports of goods and services has slowed (see Figure 7) – a risk which I had flagged in UK economy post referendum – for richer but mostly for poorer (26 August 2016).

UK exporters have so far struggled to take advantage of a cheaper Sterling, as have manufacturers (see Figure 8), because they are hitting a number of constraints which are unlikely to be alleviated near term.

At the same time, import growth has accelerated, highlighting the UK’s dependence on imported goods and services and the UK economy’s inability to substitute at short notice imported goods and services for domestically produced ones (see Figure 7). That is not to say that a cheaper Sterling will not help narrow the UK trade deficit. But it will have to be accompanied by material structural changes which are likely to take years, rather than weeks or months, to implement. 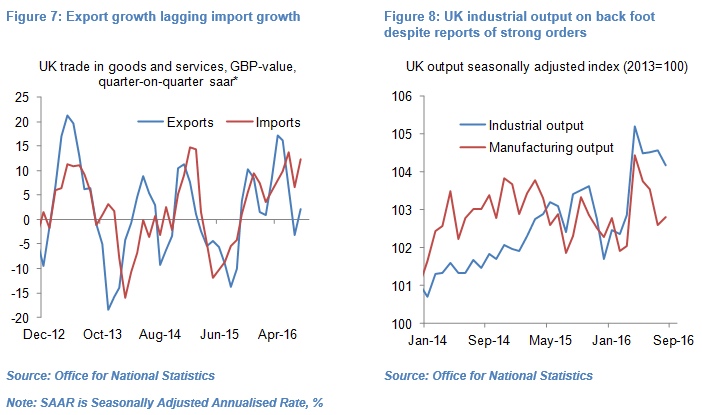 Admittedly the primary balance deficit may narrow if foreigners have in recent weeks sold some of their UK assets and the total returns on these holdings have fallen. But it is not obvious that these lower outflows would compensate for a wider trade deficit.

So, until the UK addresses its structural trade deficit, it’s going to be about all capital inflows which are currently in a negative feedback loop. Sterling’s depreciation has sparked fears of higher imported inflation given weak import substitution effects, leading foreigners to downsize their gilt holdings, sending yields higher and putting further pressure on Sterling. Figure 9 highlights this self-reinforcing spiral. At the same time the UK economy’s uncertain future may cap FDI inflows into the UK (see Figure 10) while higher yields may curb domestic borrowing, investment and spending. Moreover, until Sterling stabilises foreigners may put on hold any purchases of other UK assets, such as housing. 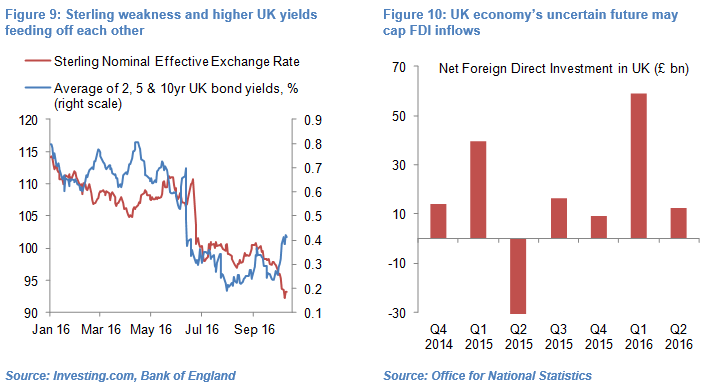 The question is what, if anything, would drive domestic and foreign investors – including large sovereign wealth funds – to increase their holdings of UK assets, including higher-yielding gilts, shares, companies and even housing, and rebuild long-sterling positions and short circuit Sterling’s current downward path.

It will probably not be BoE monetary policy. While the BoE would prefer a stable currency and lower yields, there is probably little than it can (or should) do near-term beyond reassuring markets, investors and households that it is monitoring  the situation and remains committed to fully-functioning currency and bond markets and to supporting economic growth.

History suggests that central bank FX intervention – the BoE buying Sterling – could perversely accentuate the vicious cycle of a weakening currency and higher bond yields by giving markets a target to aim at. Hiking the policy rate of 0.25% could in theory shore up Sterling but would dent the BoE’s credibility as it cut rates 25bp only two months ago. Conversely, cutting interest rates with the aim of depressing yields and supporting growth could actually speed up Sterling depreciation and ultimately smell of panic.

Sterling’s collapse may in itself attract FX inflows into the UK (looking for cheap valuations) and bargain-hunting investors. Estimates of fair value suggest that Sterling’s fall may have “overshot” but currencies can remain significantly “undervalued” (and over-valued for that matter) for long periods of time. I would therefore argue that Sterling weakness is probably a necessary but insufficient condition for capital inflows into the UK to bounce back and for Sterling to appreciate. Ultimately, the direction of UK government policy in coming months will likely to be the over-riding driver of Sterling, UK yields and economy.

Government’s current stance likely to keep Sterling on back foot

The ball is thus now firmly in the court of Prime Minister Theresa May and her government. Her hard-line stance on EU membership, which privileges control of EU immigration into the UK, has spooked markets and foreign investors concerned that this approach could hobble the UK economy. Her meagre concessions to members of the house of parliament have seemingly not impressed.  She will either have to convince sceptical markets that she can secure an advantageous new trading deal with the EU or show a far greater willingness to compromise with EU leaders if the UK is to maintain its tariff-free access to the Single Market.

Neither scenario is likely to materialise any time soon, in my view, and Sterling could weaken further. In particular the GBP/USD exchange rate could fall further, particularly if Hilary Clinton wins the 8th November US presidential elections – an increasingly probable scenario based on recent opinion polls – and the US Federal Reserve hikes its policy rate in December (to which markets still attribute only a 60% probability)

The lady is not for turning – not yet

The British government has set the bar high in terms of its starting point for negotiations with the EU and will not want to cave in so soon. Theresa May has after all been prime minister for only 92 days. However, there is still much scope for debate and compromise. Hard-Brexit – however ill-defined – is only one point on a wide spectrum of possible outcomes, with at one end adoption of World Trading Organisation (WTO) rules and at the other unfettered access to the European Single Market. In between there is an almost infinite number of possible arrangements, including free-trade agreements and customs unions.

The EU after all has a long history of dragging its feet on key issues – be it EU accession for Central European countries or Greece’s indebtedness – before fudging a compromise. This time could be different but it’s too early to come to such a conclusion.

It is also conceivable that Theresa May wants to capitalise on the popular perception about the cost of excessive immigration. Specifically, she may be seeing an opportunity for the ruling Conservative Party to capture traditional supporters of the United Kingdom Independence Party (UKIP) and Labour Party which are in disarray following messy leadership races. But Theresa May will be weary of losing support from within her own party – after all about 177 of the 330 Conservative Party MPs had expressed a wish for the UK to remain in the EU in the run-up to the referendum (see Europe – the Final Countdown, 21 June 2016). Approximately 18 were undecided and only 135 had been in favour of leaving. I would estimate that, if anything, this ratio has tilted further in favour of the “Remain” MPs as Theresa May’s hard-line approach and Sterling’s collapse may have alienated some of the more moderate “Leave” MPs.

Moreover, while Theresa May has a popular mandate to take the UK out of the EU, she does not have a clear mandate to set the terms and conditions for the UK’s exit from the EU and for its new trading arrangements (the referendum question was simply whether British voters wanted the UK to remain or leave the EU). From a purely political survival perspective, the government and ruling Conservative Party leadership would be unlikely to ignore a growing chorus of concern amongst the electorate.

Former Prime Minister Margaret Thatcher, to whom Theresa May has rightly or wrongly been compared, refused to take into account the changing tide of popular opinion after she introduced the poll tax and was subsequently forced to step down in 1990. Thatcher had famously said on 10 October 1980 that “the lady’s not for turning” and indeed she didn’t but it cost her the premiership ten years later. I suspect this is a lesson ingrained in all Conservative Party leaders and prime ministers.

tagged with GBP, Theresa May