Global growth – Down but not out

While equity and commodity markets have recovered, it is an almost consensus view that already tepid global economic growth in H2 2015 likely weakened furthered in Q3 and shows few signs of recovering near-term,

Governments, lacking in both leadership and fiscal-reflation headroom, have passed the buck to central banks struggling to hit multiple growth, inflation and financial stability targets.

However, talk of global recession let alone economic collapse is somewhat overdone and I reiterate my long-held view that the global growth story is a cause for concern, not panic (17 December 2014).

Global GDP growth has been mediocre but pretty stable in the past three years at around 2.4 and 3.2%, according to respectively World Bank and IMF estimates, so perhaps it is the expectation of a return to pre-2008 growth rates which is unfounded.

International institutions have revised down their global GDP growth forecasts for 2015 but history suggests that the IMF’s 2015 forecast of 3.1% growth may prove a tad too pessimistic.

The focus on China’s ill-defined “hard-landing” and “true” growth rate has obscured the fact that growth in US, still the world’s largest economy, is back to its long-term average.

Finally, while policy-makers are running out of tools to spur their economies, a number of emerging market central banks, including in China and India, still have room to cut policy rates further.

Governments in the US, Eurozone and Japan are struggling to deliver on the structural reforms necessary to address challenging demographics and low productivity growth and are either unwilling or unable to fiscally reflate their indebted economies.

Emerging markets are facing the potentially self-reinforcing triple whammy of collapsing international trade, capital outflows and a stronger US dollar. Where central banks’ real policy rates are already low and currencies are under duress (South Africa, Russia, Mexico), policy-makers are likely to remain in a bind. China’s transition from over-investment to higher value-added exports and consumption driven growth has stalled, with markets struggling to quantify the damage to Chinese corporates and banks.

A lack of leadership lies at the heart of the problem:

Governments have resorted to passing the buck to central banks which are ill-suited to hitting multiple targets of inflation, growth and financial stability and quickly running out of hard-hitting policy ammunition.

It is the expectation that policy-makers somehow can and should engineer growth back to the pre financial crisis levels that is perhaps misguided. Put differently, global growth around 2.5-3.0% may well be the new normal, rather than the long-term 3.5% average let alone the heady 4-6% growth occasionally recorded in the late 1990s and mid-2000s. 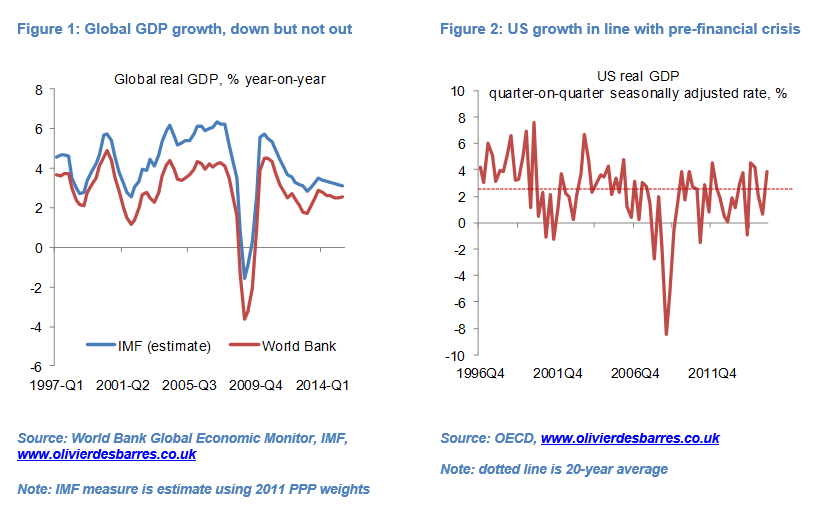 Growth outlook not rosy but short of calamitous

While most Q3 GDP data will not be released for a few more weeks (see Figure 8), the list of indicators pointing to a slowdown in growth from Q2 is long and distinguished. In particular, the global manufacturing Purchasing Managers Index (PMI), which correlates reasonably well with global GDP growth, suggests that the World Bank’s measure of GDP growth slowed to around 2.4% yoy in Q3 (see Figure 3) while the IMF’s measure of growth slowed to 3.0% yoy (see Figure 4). 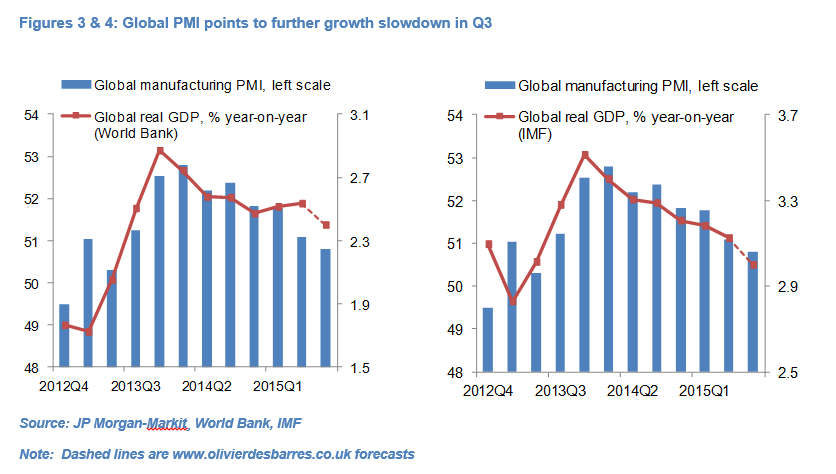 Unsurprisingly, the IMF and other financial institutions have had to further revise downwards their once-again overly optimistic annual forecasts (see Figure 5). Specifically, in its October World Economic Outlook, the IMF revised its global GDP growth forecasts for 2015 and 2016 to 3.1% and 3.6%, respectively, from the 3.3% and 3.8% forecasts made in its July World Economic Outlook. The OECD made similar downward revisions in its September Economic Outlook, as did the National Institute of Economic and Social Research in August and the World Bank in June.

Note, however, that in the previous five years the IMF’s World Economic Outlook October forecasts for global GDP growth that year have systematically under-estimated actual growth by on average 0.3 percentage points (see Figure 6). For example, the IMF in its October 2010 Economic Outlook forecast global GDP growth of 4.8% in 2010, compared to actual growth of 5.4%. If this pattern is replicated, the IMF’s 2015 growth forecast of 3.1% may prove a tad too pessimistic, with actual growth closer to the 2012-2014 average of just under 3.4%. 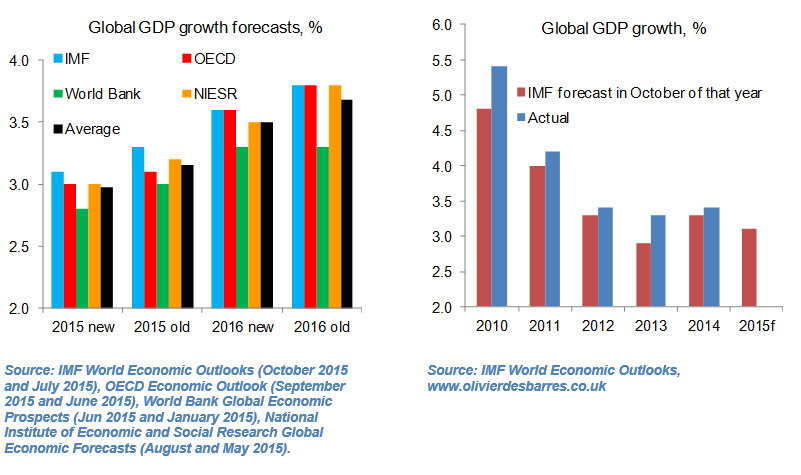 A Google search of “China hard landing” throws up 5.8 million results and yet a clear definition of what constitutes a Chinese hard landing or how to measure it remains elusive. That is not to deny that Chinese growth has slowed sharply in recent years but it is odd that so few, if any, attempts have been made to define the parameters of a hard landing and therefore whether Chinese policy responses are appropriate.

Ultimately it is a subjective assessment. Australian mining companies would clearly qualify China’s growth slowdown and associated collapse in the price of commodities such as coal and iron ore as a hard landing. But other export-driven economies such as Germany have fared far better, with German exports rising on average 0.3% per month in the four years to July 2015 (see Figure 7). If the 5% collapse in the euro-value of exports in August proves not to be a one-off, this could be evidence that China’s hard landing is being more widely felt.

Furthermore, there has been much debate about the “true” rate of Chinese growth being closer to 4-5%. But to the extent that the Chinese economy is at the heart of the global economy, growth in the rest of the world and commodity prices – which presumably are accurately reported – already reflect weak Chinese growth. 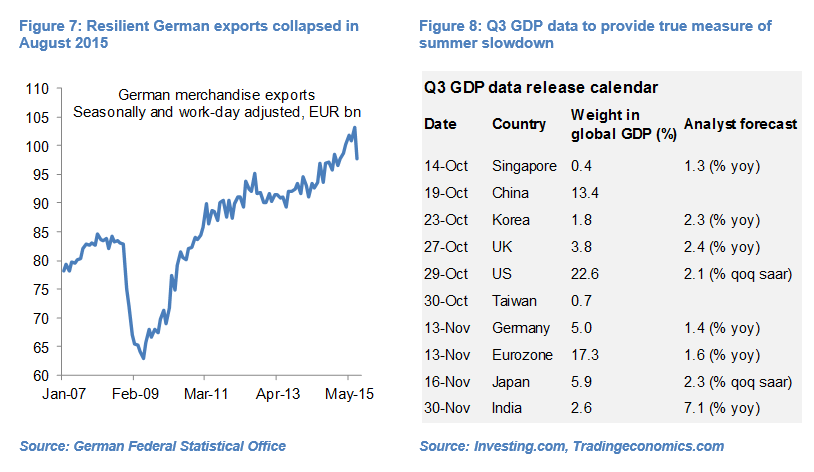 China and US (almost) equal partners in growth

The understandable fascination with slowing Chinese growth has perhaps distracted attention from the US economy’s recovery and its growing contribution to global growth.

US GDP growth over the past five quarters has averaged 3.1% quarter-on-quarter annualised, in line with the average growth rate in the twelve years preceding the great financial crisis (see Figure 2). With the US accounting for about 23% of the world’s (nominal) GDP based on market exchange rates, US real GDP growth since mid-2014 has accounted for about 28% of global growth (see Figure 9). This is still below China’s contribution of 37% but in the preceding three years, the Chinese and US contributions to global growth were, respectively, 48% and 14% (see Figure 10). 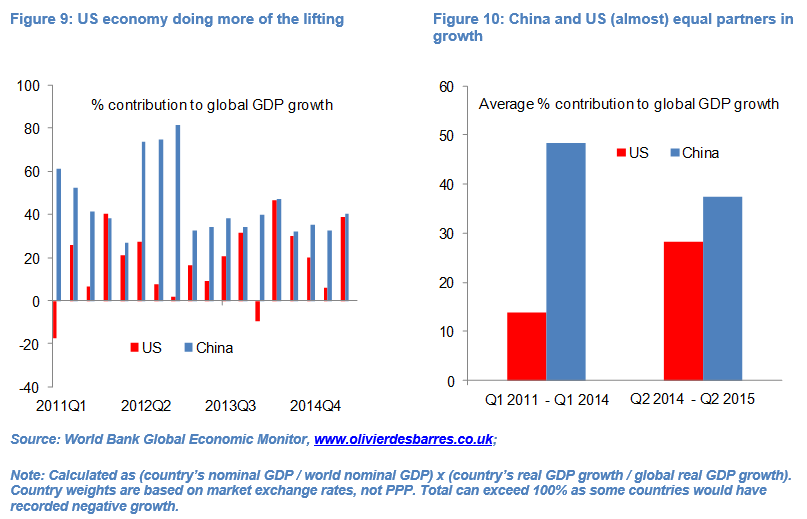 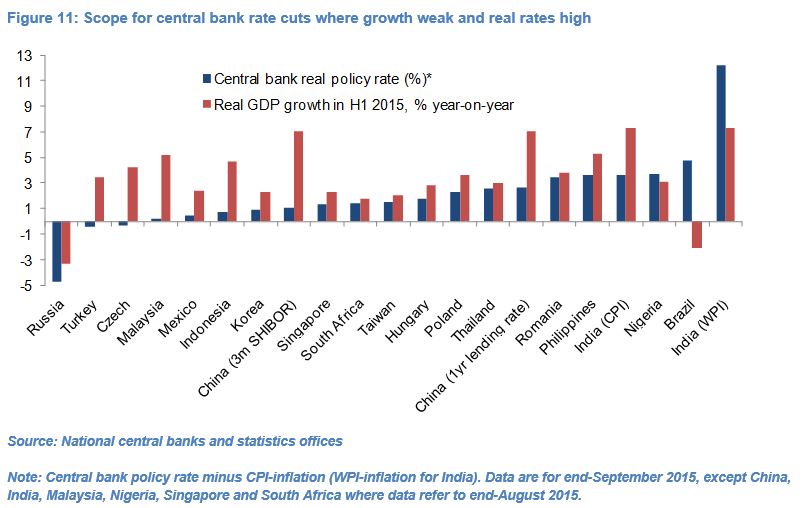