Four themes have hogged the headlines this year – Greece, China, the Fed and linking these three topics…the risk of deflation and associated damage to the global economy.

At the risk of over-simplifying a complex picture, what is striking is that global headline and core inflation have actually been pretty well behaved (see Figure 1). Further analysis shows that headline and core inflation have evolved in reasonably narrow ranges since early 2013 in the world’s largest developed economies as well as China and Mexico. The fact these inflation data series are a little boring is in itself noteworthy given that central banks typically favour low and stable inflation. 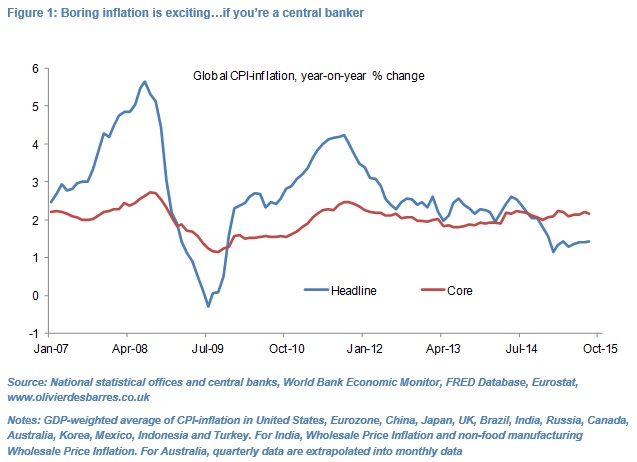 It would be foolhardy to infer hard conclusions about global monetary policy going forward, let alone about individual central banks’ reaction functions. Reasonably benign core CPI-inflation, however, suggests that the world’s major central banks are perhaps slightly more comfortable than markets give them credit for, even if their bias remains dovish given weak PPI-inflation (China), inflationary expectations (US) and more generally global economic growth.

My core scenario is for the US Fed, Bank of England and ECB to do little to monetary policy in the next couple of months bar tweak their language. Central banks of economies exposed to China and commodities such as the Reserve Bank of Australia, the Reserve Bank of New Zealand and the Bank of Canada may well delivery another rate cut. Similarly, I expect emerging market central banks to look for opportunities to cut policy rates, particularly if the Fed is not going to hike its policy rate until December.

There are admittedly dozens of measures of inflation and everyone has their favourite. My analysis focuses on the two most commonly used measures which central banks and markets tend to prioritise: headline consumer prices and consumer prices excluding energy and food prices (core inflation). The two series are weighted averages of consumer price inflation in the world’s 14 largest economies, which account for about 82% of the world’s GDP (see Figure 1 footnote for full details).

Core CPI-inflation has been even more stable, unsurprisingly, as it strips out typically more volatile energy and food prices. It was around 2.15% yoy in August, bang in the middle of a tight 1.8-2.5% yoy range in place since early 2011.

…and most developed and EM economies

The global headline and core series are weighted averages of 14 underlying series and so by definition could be smooth even if their underlying components are very volatile. But Figures 2 and 3 show that headline and in particular core inflation have been pretty stable in most major economies since early 2013. 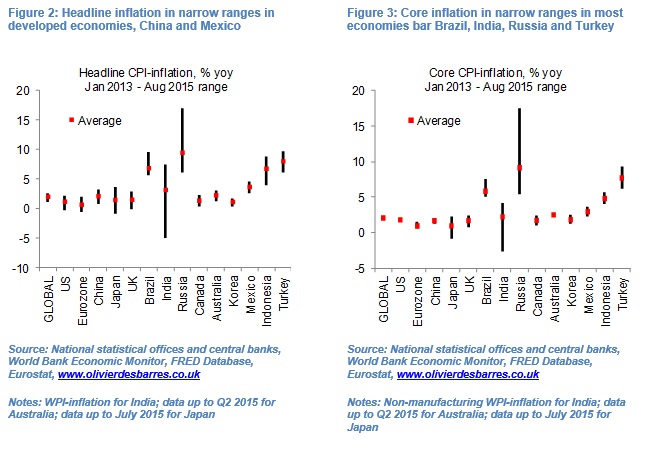 Indeed core inflation has been in a tight range in the main developed economies – the US and eurozone (see Figure 4), UK, Canada, Australia and Korea – but also the world’s largest EM economies including China (see Figure 5), Mexico and Indonesia. Only in three of the four BRIC countries (Brazil, Russia and India), Turkey and Japan has core inflation evolved in much wider ranges. The jump in Japan’s core inflation in April 2014 and sharp drop a year later mainly reflect the introduction and then fading impact of last year’s sales tax. 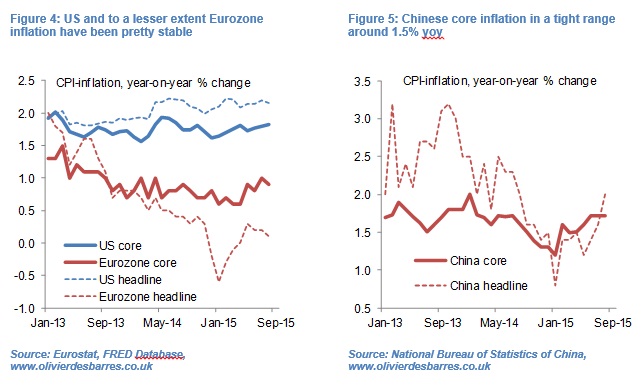 Fed chairperson Yellen said on 24th September that she “anticipated that it would likely be appropriate to raise the target range for the federal funds rate sometime later this year”. This comes only a week after the ultimately dovish FOMC left its policy rate on hold, pointing to weak international economic and market dynamics (see Fed is people dependent, 16 September 2015).

The market does not seem utterly convinced, with pricing for a December hike only ticking a little higher to 12bp from 10bp or put differently a 48% probability of a 25bp hike. Indeed her statement begs the question of what has happened in the past seven days that she knows about and we don’t?  Presumably her comments in part aim to temper the uncertainty surrounding the timing of the Fed’s first rate hike.

But the Fed is “data-dependent” and much could happen to domestic and global macro data in the next three months, not to mention that data are proving notoriously difficult to forecast (explaining in part why FOMC members have changed their minds so many times about the timing of the first hike). Furthermore, last week’s policy decision shows that the Fed is clearly taking into account international developments (sounds obvious now but many analysts at the time argued that the Fed would give far greater weight to the reasonably strong US economy).

So how can Yellen be so sure that Fed will hike before end-year? Is she in a round-about way saying that the domestic economy will be so strong as to make international developments almost irrelevant? Or is she hinting that she expects the global economy and global markets to be on a surer footing in the next three months?

In any case it strikes me as a bold call. Maybe bold is what markets need after months of central bank and government policy dithering…as long as Yellen does not have to backtrack come 16th December.

Any talk of a policy rate hike this year has waned but at the same time MPC member Haldane’s argument that the next move could be a cut seems a tad farfetched on current evidence. The Bank of England is likely to remain in rates-on-hold mode for the next six months.

The eurozone economy is shining a little brighter with growth indicators pointing in the right direction. But the economy is coming from a low base, inflation is non-existent and the euro nominal effective rate has appreciated 6% since mid-April. Furthermore, structural reforms which could offer a long-term platform to eurozone growth have been shelved or stalled while Germany’s unfolding corporate scandal will not do much good to already anaemic GDP growth of 0.7% in H1.

So the debate appears to have shifted from whether the ECB will beef up its current quantitative easing program to when. German opposition to an expanded QE program is likely to delay such a decision and the ECB’s track record suggests it would wait for clearer signs of economic deterioration before pulling the trigger.

I maintain my view, expressed in Asymmetric Risk to Emerging Market Monetary Policy (6 August 2015), that in emerging economies the risk is biased towards monetary policy easing given that real policy rates remain quite high by historical standards (see Figure 6). Indeed, the People’s Bank of China has since cut its target rate and the Reserve Bank of India may well be the next EM central bank to cut rates when it meets on 29th September. 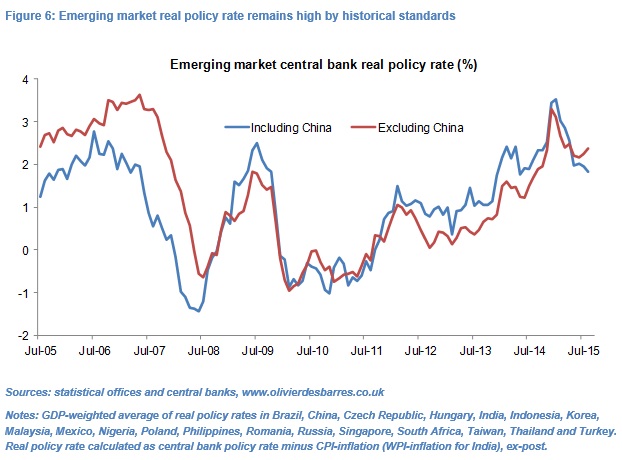