After months of half truths, hollow promises, claims of greatness, veiled threats and televised showdowns, it’s finally over.  No, I’m not referring to the overhyped but ultimately disappointing Mayweather vs Pacquaio “fight-of-the-decade”, but the far more unexpected outcome of the UK general election. The ruling Conservative Party has comprehensively won the battle and war for the hearts – or at least the minds – of UK voters.

Prime Minister Cameron’s party won a far-larger than expected 329 seats, clear of the absolute majority of 326. Labour (232 seats) and the Liberal Democrats (8 seats) were by far the biggest losers and both party leaders have already resigned. The Scottish National Party (SNP) won all but three of the 59 seats up for grabs in Scotland. In Northern Ireland, the Democratic Union Party DUP and Sinn Fein again emerged as the largest parties with 8 and 4 seats, respectively. The smaller parties, including the UK Independence Party (UKIP), the Green Party and Welsh Plaid Cymru, have performed as expected, winning only a handful of seats. The winner of the St Ives constituency seat will be announced at about 16:00.

The Conservative Party will thus be forming a majority government, confounding predictions of another coalition government and raising question marks about the usefulness of pre-election polls which had shown the Conservatives and Labour neck and neck. Moreover, for all the talk of the emergence of multi-party politics, the three largest parties still hold 95% of the seats.

Sterling and UK equities have perhaps unsurprisingly responded positively to a market-friendly Conservative government ruling single-handedly for another next five years. There is some room for this rally to extend but sterling faces sterner challenges ahead, including the financing of large twin deficits, lukewarm macro data and the omnipresent threat of a referendum on the UK’s EU membership.

Figure 1:  Conservatives are three seats clear of an absolute majority 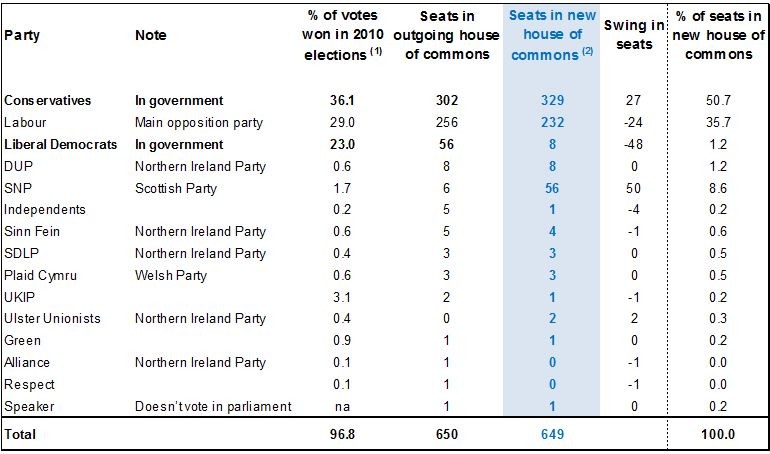 Conservatives and SNP land winning punch, Labour and Liberal Democrats down and out

With the Conservatives enjoying a reasonably comfortable working majority, the next few weeks should be pretty straightforward. The first litmus test will be the parliamentary vote in early June on the Queen’s speech which has been pencilled for 27 May but it should pose the Conservatives no problem (see Figure 2). Markets’ attention is likely to soon re-focus on key macro data, including manufacturing, employment and inflation numbers due in the next ten days 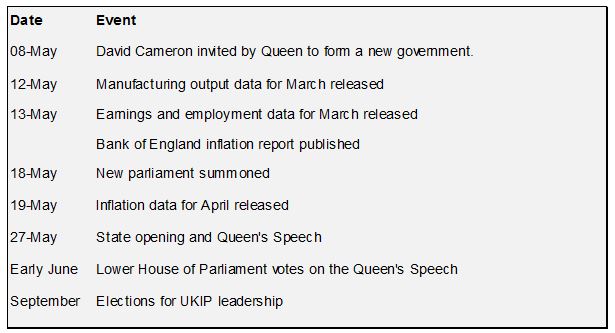 The debate about the pros and cons of a two, even three or four party coalition government proved futile and today’s result raises question marks about the usefulness of pre-election polls which had shown the Conservatives and Labour neck and neck with 34%. Opinion polls have historically not been very accurate guides to actual UK election outcomes, unlike in the US, but on this occasion they were particularly misleading.

Moreover, for all the talk of the emergence of multi-party politics, the three largest parties still hold 95% of the seats. Undoubtedly the merits of the first-past-the-post electoral system will again be scrutinised, with UKIP in particular debating the validity of a system which gives a party with 13% of the national vote only one seat in parliament.

There will undoubtedly be a lengthy post-mortem on this surprising election result but I would list the following factors as having played a role:

Sterling – Room to bounce but further challenges ahead

The FTSE 100 is up 2% in early trading and sterling has rallied sharply since the first exit polls were released last night, appreciating 1.5% vs the USD and 2.2% vs the euro. This is broadly in line with my expectations that the currency market would view a pro-market, pro-business Conservative government in a favourable light (see UK election – asymmetric risk to sterling, 30 April 2015).

There is scope for this rally to extend as markets will not have to contend with a protracted period of coalition-building and uncertainty and sterling had cheapened in the months prior the election (see Figure 3). Indeed, the sterling Effective Exchange Rate (EER) had weakened about 2% in the two months prior the election due to a likely combination of political and policy uncertainty coupled with disappointing economic data (the EER simply measures sterling’s performance versus the currencies of the UK’s trading partner and thus a good of sterling’s competitiveness).

However, it’s not obvious that a sterling rally will have much staying power.