Despite the volatility in financial markets, Non-Japan Asia (NJA) currencies continue to behave broadly in line with historical patterns. Specifically, a basket of NJA currencies (excluding the renminbi) which was appreciating at about 3% month-on-month versus the USD dollar is now weakening in month-on-month terms, as largely predicted (see Figure 1). The pattern is similar when NJA currencies are measured against trading partner currencies.

In level terms, Asian currencies have been broadly stable in the past couple of months, with the exception of the IDR and KRW which have outperformed. I believe this in part reflects capital flows and the willingness and ability of central banks to stabilise their currencies to support economic growth. 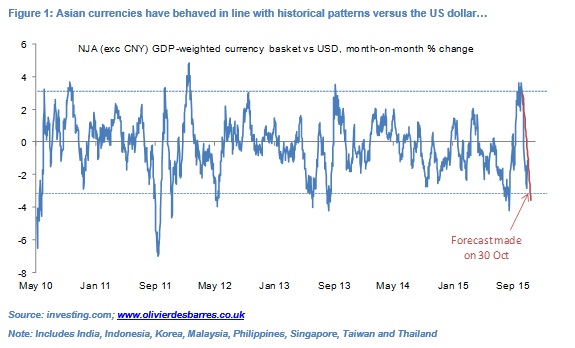 In History points to Asian FX rally fizzling out (30 October 2015), I forecast based on precedent that the pace of appreciation in NJA currencies, excluding CNY, versus the US dollar would slow to around zero percent in forthcoming weeks, before turning to depreciation – the red line in Figure 1. My starting point was that in the past five years NJA currencies have rarely appreciated or depreciated versus the USD by more than about 3% month-on-month. I estimated that this GDP-weighted basket of NJA currencies had appreciated by about 3.3% month-on-month (mom) by late October and was thus likely at a turning point.

It’s a similar picture for NJA currencies versus their trading partners’ currencies. A GDP weighted basket of NJA nominal effective exchange rates (NEERs) was appreciating around 2.8% mom in late-October, as depicted in Figure 2. But, as often the case in the past, that pace of appreciation slowed, bottoming out near zero in mid-November. It has not turned to depreciation due to the fact that a number of these trading partner currencies, including the euro, have themselves been weak against the US dollar.

In level terms, the NJA currency basket is broadly in the middle of a 4-week range versus the US dollar and remains remarkably stable in NEER terms (see Figure 3). Of course this masks a degree of currency heterogeneity, with the IDR and KRW outperforming (see Figures 5 & 6). But the majority of Asian currencies, including the MYR, INR, SGD, THB and TWD, have exhibited similar performances in the past two and half months. Back in early September, I had highlighted the scope for the KRW to outperform but the IDR has gone against the grain of expectations by also outperforming (see Thai Baht and Korean Won Could Outperform Other Asian Currencies Following the Recent Sell-Off, 16 September 2015).

The Chinese renminbi – a quasi peg to the strong US dollar (see Figure 7) – of course exhibits a somewhat different pattern to the majority of other Asian currencies. The CNY NEER is currently appreciating by around 2% mom – a pace of appreciation still within historical boundaries (see Figure 8) – but is up only 0.3% since early September (see Figure 6). 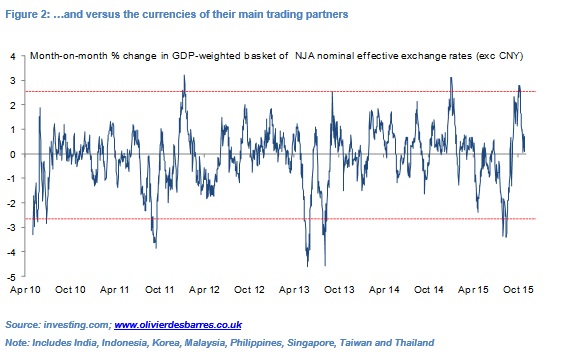 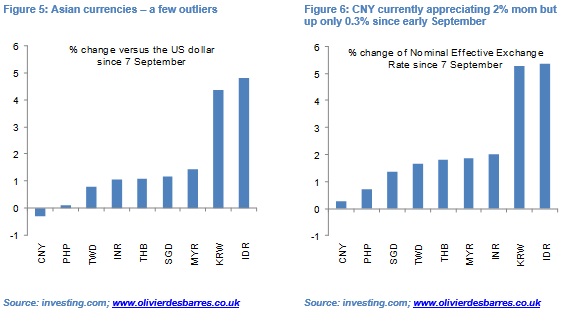 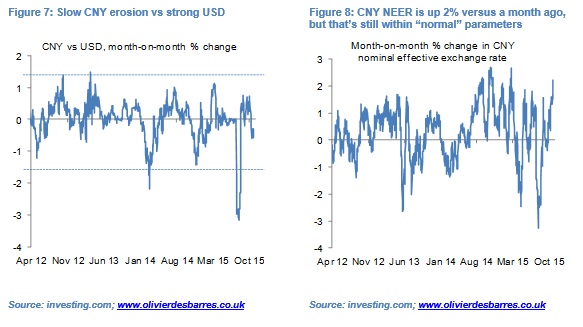