Non-Japan Asian currencies up in past ten days, led by CNY, IDR and THB

Non-Japan Asian (NJA) currencies have staged a mini comeback since mid-May, in line with my expectations that precedent suggested that NJA currencies would stabilise and possibly appreciate gradually after a month of relative weakness (see Asian currencies still on the straight and narrow, 15 May 2015). A GDP-weighted basket of NJA nominal effective exchange rates (NEERs), excluding the CNY, has appreciated about 0.7% since 15 May, according to my estimates (see Figure 1). This reverses over a third of the depreciation recorded in the previous month. 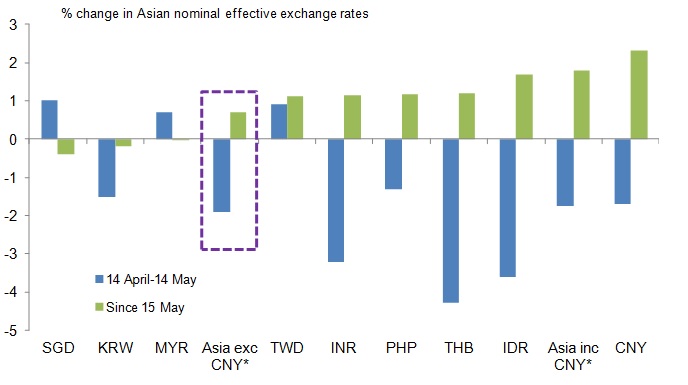 The pattern is even more obvious if the Chinese yuan is included, with the CNY NEER appreciating about 2.3% since mid-May, more than reversing the 1.8% depreciation recorded between 14 April and 14 May. Over the past year, the CNY NEER has appreciated about 14.5%, by far the fastest pace of annual appreciation in Asia (see Figure 2). It is thus perhaps unsurprising that the IMF acknowledged yesterday “that the substantial real effective appreciation over the past year has brought the [yuan] exchange rate to a level that is no longer undervalued”. This is in contrast to the US Treasury’s April report to Congress which describes the yuan real exchange rate as still “significantly undervalued”. 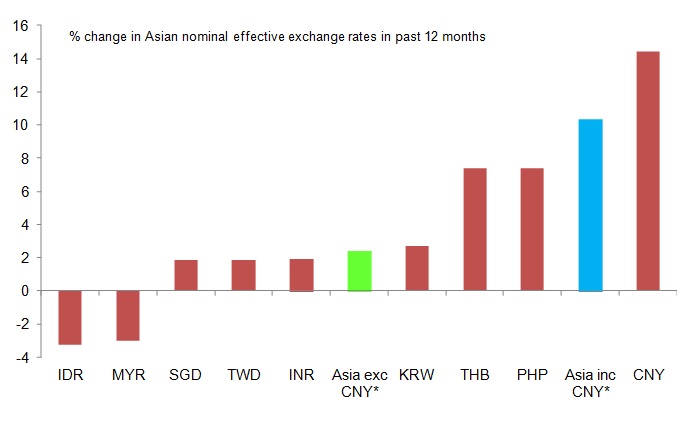 Figure 2: CNY NEER up 14.5% in past year, but IMF and US Treasury disagree on whether yuan undervalued

All NJA currencies bar the Singapore Dollar and Korean Won have appreciated versus their trading partners’ currencies in the past ten days. This can in part be attributed to the market’s more sanguine view of an imminent start to the Fed rate hiking cycle and a slight dip in oil prices. Interestingly, this rebound in NJA currencies is not uncharacteristic, as Figure 3 shows. Bar rare financial shocks and acute sell-offs/rallies, NJA currencies in recent years have tended to appreciate modestly for short periods of time, before giving back some or all of their gains and vice-versa.

Importantly, there are few signs that NJA central banks are standing in the way of this recent modest currency rebound. The increase in FX-denominated corporate debt and servicing costs, notably in China, does provide policy-makers with an argument in favour of a stable or mildly appreciating local currency. More generally, still high levels of private sector leverage in countries such as Korea are curbing policy-makers’ appetite to further loosen monetary policy. Furthermore, central banks of countries with historically volatile currencies – Indonesia for example – have come a long way in successfully fading FX peaks and troughs.

But I maintain my view that higher yields in the west and tepid capital inflows into NJA – as the market digests the implications of stronger than expected US core inflation and durable goods orders data for April – and soft NJA exports are likely to cap the magnitude of this currency rebound. Moreover, with Asian inflation at record lows, central bank officials have a decent incentive to put a break on any prolonged and/or rapid currency appreciation. This may not present FX market participants with many exciting directional trading opportunities at present but it is a modus operandi which has worked for NJA policy-makers in the past and I see few reasons for them to deviate from script. 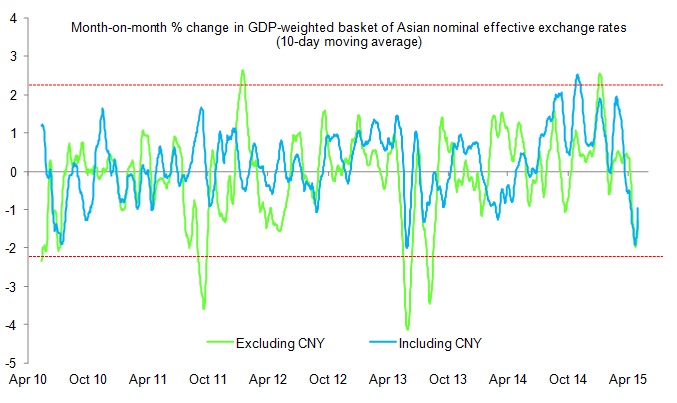 Yen bucking the trend, Bank of Japan hands-off for now

The yen NEER has weakened about 11% and 30% in the past one and three years, respectively, and thus Japanese exports have become far more competitive, as reflected in buoyant export growth and corporate profitability. This competitiveness gain is even more marked against Japan’s biggest competitors, including South Korea (see Figure 4).

So whether we a weaker yen is a direct objective of quantitative easing or merely a helpful by-product, the Bank of Japan’s QE has successfully contributed to a weaker and more competitive yen. At the same time a number of BoJ board members have welcomed a weak but stable currency. The door is still open to a further round of BoJ monetary policy easing later this year if growth does not pick up and jeopardises the central bank’s medium-term inflation target of 2% and if competitor currencies exhibit a trend of sustained weakening. However, there is yet no sense of urgency within a BoJ seemingly preferring to wait-and-hold. 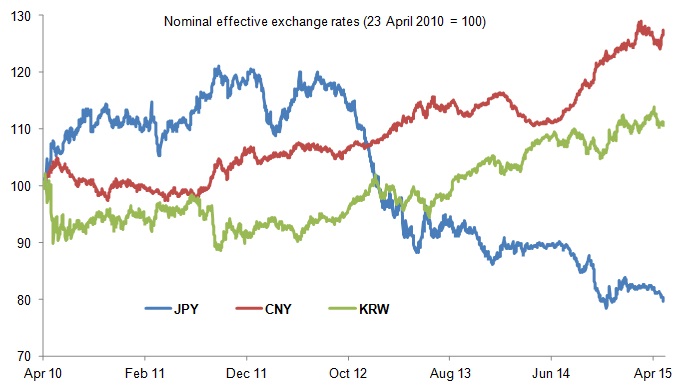